The survey received 217 responses.  To qualify for inclusion in the survey, either the offender had to be part of the plain community, or the victim had to be part of the plain community - or both.  As for the definition of what constitutes abuse, I will defer to Supreme Court Justice Potter Stewart, in a case (Jacobellis v. Ohio) argued in 1964.  In it, the court was trying to define pornography.  Justice Stewart keenly advanced the experiential definition, "I know it when I see it."  In like manner, because abuse can have different definitions, for the purposes of this survey, if a person felt they experienced sexual abuse, their survey contribution was included.

Jesus can and will bear the burdens of all who seek Him: "Come unto me, all ye that labour and are heavy laden, and I will give you rest." (Mt 11:28)  He also calls us to bear one anothers' burdens (Gal 6:2).  I therefore designed the study to allow respondents to provide comments, as well as the usual multiple choice answers.  This was to give them an opportunity to tell their story and provide nuances where appropriate.  Many have never told their stories to another soul on Earth.  Some never will.  I pray that being able to participate in this survey will, in a small way, help to lift that burden.

It is hard for anyone to sift through 217 stories of abuse, and not be profoundly affected, even having seen much in my 20+ year career as an Emergency Medicine physician.  For some of the questions, therefore, I have endeavored to give you, the reader, a sampling of some of the more poignant comments by the respondents.

So these results show a higher proportion of females offended than males.  Additionally, as seen below in Question #5, there are a disproportionate number of men (more than women) responding from Old Order groups - likely due to access issues to electronic media (though we did post notices in print media in Holmes, Lancaster, and Elkhart counties).  This means that it is probably a real finding that women and girls are affected at a higher proportion than the general population.  Alternately, it could also mean that men are less likely to respond due to social constraints - or views of ambivalence.

In either situation, and if these numbers bear out to be true, it begs the following questions:


Still, the lingering question is this:  What is the rate of sexual abuse?  How does our community compare to the general population?  How extensive of a problem is this?  I will be able to make a rough estimate based on the information in this survey, and based on public information, but it will have to wait until the rest of the results are out. 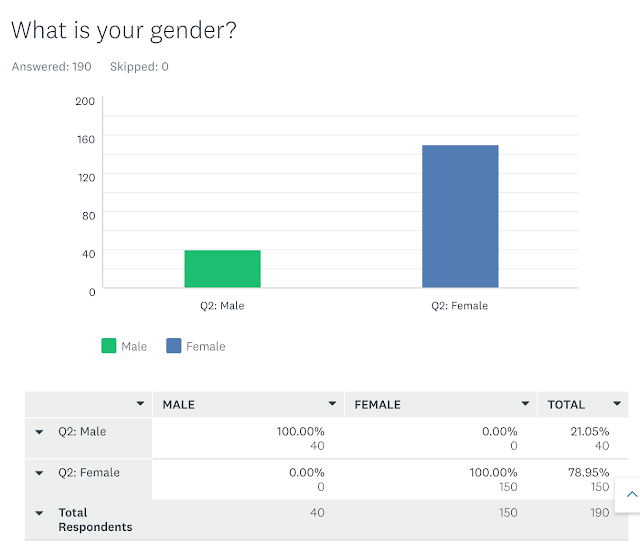 2.  Your age at the time of the first offense?

In both groups - it should be noted that the vast majority of the offended (62% males and 73% of females) were first violated before what is commonly regarded as the age of accountability - being about 10 years old.  Please bear this in mind, that the vast majority of these children, who likely still have a very abstract notion of what it is to be a Christian (including being born again), will have an even more difficult time understanding the concept of unconditional forgiveness, which goes against the very grain of human nature.

Note also that approximately 8% of female offended and 3% of male were first offended at 0-2 years of age.  It may be tempting to say that repressed memory therapy accounted for these cases (a therapy that has been shown to be inconsistently reliable, and inadmissible in court).  However, my review of these particular situations reveal that (aside from 2 cases - 1% of the total), this group of offended had multiple offenders - offenses that stretched out over multiple years, or were discovered by the offender's confession and repentance. 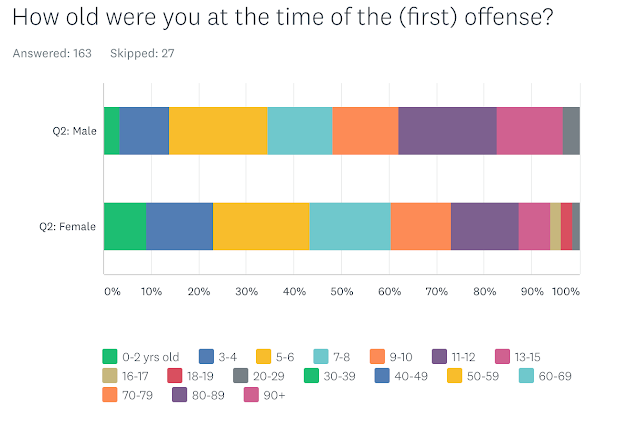 Female respondents tended to be older than male respondents.  It is interesting that this is so, considering that the girls and women tended to be abused at an earlier age.  While no two victims are the same, this suggests that the effects of the assaults on some women may tend to be more pronounced for a longer period of time.

This should not be confused with unforgiveness, as you will see as the rest of the survey is revealed.  The memory of trauma, whether or not forgiveness is involved, can last a lifetime. 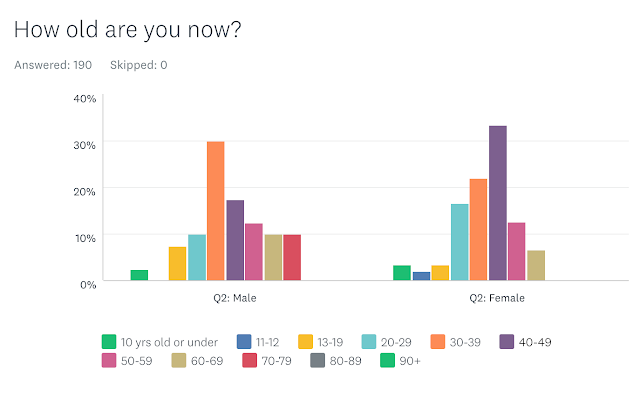 For both male and female respondents, the largest group of offender was in the 13-19 year old range.  HOWEVER, there were a large number of offenses (between 20 and 30%) instigated by preteens.  There may be some among us that simply chalk this up to normal curiosity.  Yet the fact that they are regarded as offenses by the respondents shows that it was not simply viewed as a matter of curiosity by the respondents.

The take home message to parents:  leaving even 10 year old children unsupervised for prolonged periods of time is unwise.  Likewise, having distinct sleeping arrangements would be common sense: 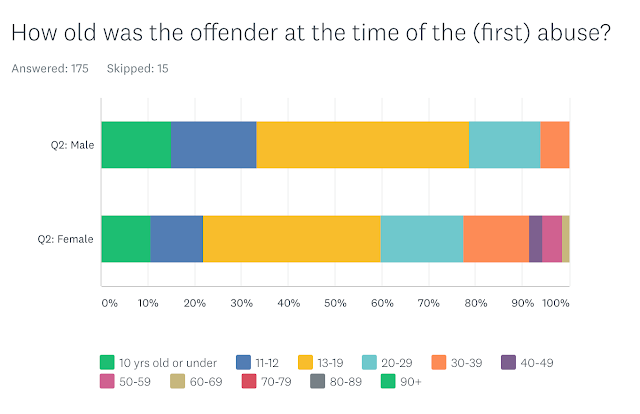 5.  Which church group best fits for the respondent?

The leading respondents among men are Other Conservative Mennonite, Beachy, the Old Order Amish - in that order.  Among women, it is Other Conservative Mennonite, Beachy, then Other.  This suggests an under reporting among Old Order Amish women, as they likely have less access to electronic media, despite the survey availability being made known in print media. 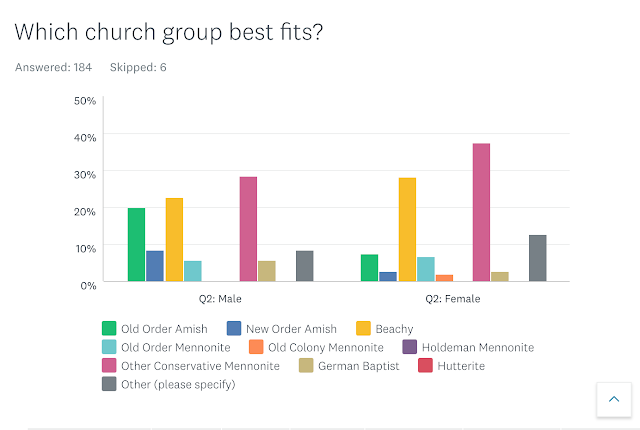 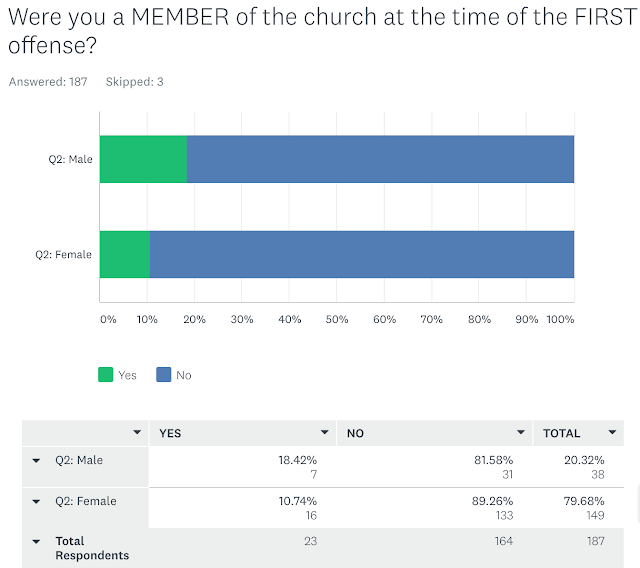 6.  Were you a church member at the time of the first offense?

Almost 90% of women and girls were not yet church members at the time of the offense, about 82% for boys and men.  This stands to reason, since girls were offended at an earlier age.

7.  Church membership of the offender. 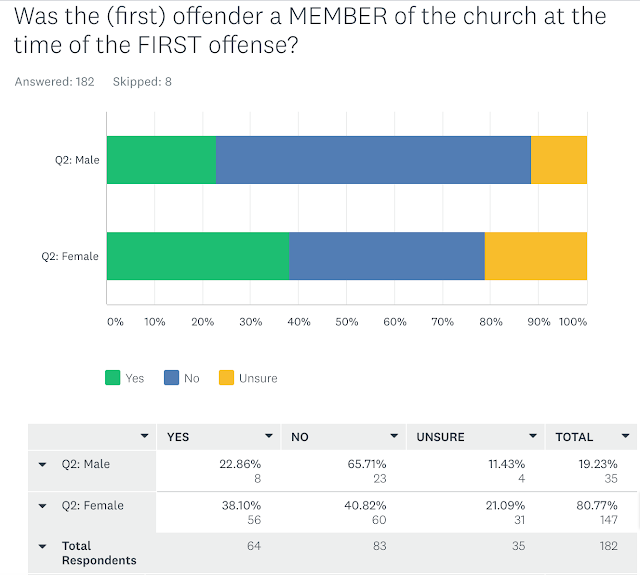 Females are involved in about 10% of both male and female offenses.  This may be surprising to some, but it is fairly similar to the percentages found in the general population. 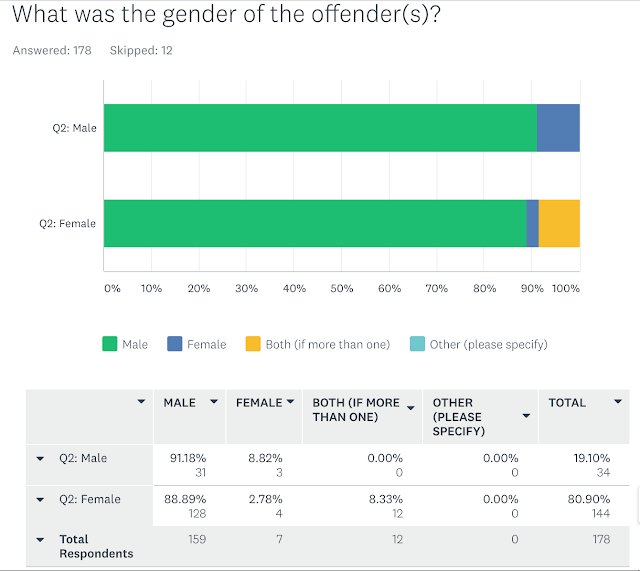 9.   Did the offender also have a history of sexual abuse?

After reading the comment section, it was evident that there was a large number of respondents that were suspicious the offender was abused himself or herself, but they were unsure.  I purposely did not structure the answer to be Yes/No/Unsure, because only the offender could be sure.  In retrospect, I should have labeled the selections Yes/Likely/Probably Not/Uncertain.

In any case, I believe the actual number of 19% of offenders having a personal history of being offended to be much larger.  This reinforces the concept of tendency of sin to become intergenerational. 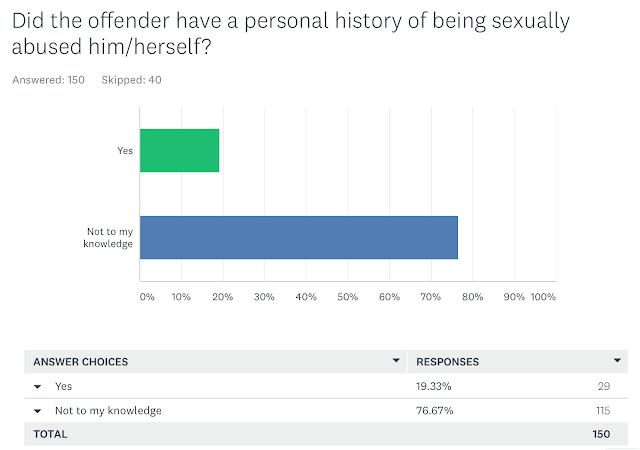 Note that the range of offenses and number of offenders was significantly higher with female offended.

You may note that the totals add up to over 100%.  I allowed for this, as would be the case if there were multiple offenders, or if an offender had multiple roles (e.g. an uncle who is also a pastor).

Several women mentioned boyfriend, as well as classmate.  I neglected to include these as a separate categories.  It should be corrected in any follow-up survey.

12.  How many times were you offended?

In only a small minority was the offense an isolated incident.  The rest of the statistics speak for themselves. 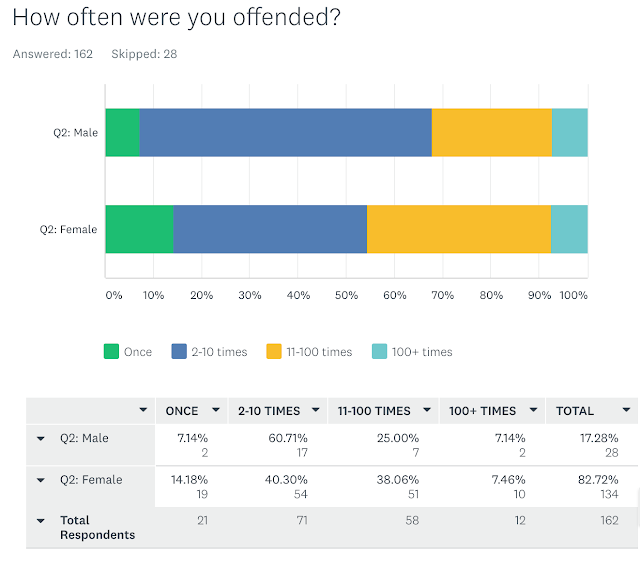 The next segment of the survey will deal with information about the offense: witnesses, how it was handled by family and church, reporting, and the consequences.  I hope to have it out within the next 2 weeks.  As you can tell, I tend to run behind sometimes, but I assure you I will try to stick to the schedule.

So far, there have been no conclusions drawn, as I hope to allow readers to digest this information.  You are obviously free to reach your own conclusions.  Lord willing, I will draw from this information in future articles that I will submit to you this Spring.