And in them is fulfilled the prophecy of Esaias, which saith, By hearing ye shall hear, and shall not understand; and seeing ye shall see, and shall not perceive: For this people's heart is waxed gross, and their ears are dull of hearing, and their eyes they have closed; lest at any time they should see with their eyes, and hear with their ears, and should understand with their heart, and should be converted, and I should heal them. But blessed are your eyes, for they see: and your ears, for they hear.  (Matthew 13:14-16)

In this article, I would like to consider the second in this series on vaccines.  As a practicing physician of over 20 years, it has taken much time and effort to weed through the literature, weighing the claims of the strongly pro-vaccination medical establishment and the equally vehement anti-vaccination groups.  I will try to shed some light on a very mystifying topic - what is the truth?
Jesus quoted the prophet Isaiah, who chastised his generation for being willfully ignorant.  The attitude of the people was, “If you can’t stand the answer, don’t ask the question” – even if that response was against their best interest.  In contrast, Jesus blessed those who sought after Him, those who sought the Truth in all they saw and heard – no matter where it led.  So, with these thoughts, let us pray for clarity and God’s wisdom, as we walk forward in faith on this issue.
Vaccines and Autism
Autism is a condition characterized by challenges with social skills, repetitive behaviors, and speech.  There are significant difficulties in relating with others, as those who are afflicted seem to be in their own world.
Almost 20 years ago to the day, on February 28, 1998, a relatively nondescript article appeared in the prestigious medical journal, The Lancet.1  In it, the author presented “case studies” of 12 children who received the MMR (Mumps, Measles, and Rubella) vaccine, who then rapidly deteriorated.  Ten of the children’s diagnosis of Autism became clearly evident, and two of them developed a brain inflammation (called  “encephalitis”).
In all these cases studied, the change was rapid and profound – one happened “immediately after”, but most within a week, and all within two months.  If true, the implications were VERY serious: Vaccines can cause a profound personality change in children – Autism.  Even so, the author conceded that, “We did not prove an association between the measles, mumps, and rubella vaccine and the syndrome [autism] described.”  He even suggested that genetic vulnerabilities may have been largely responsible, since there is a much higher rate of Autism with boys than girls – about a 4 to 1 ratio.
All scientists and physicians know that “case studies” are actually the lowest level of research – just a step above testimonials.  What may work for, or what happened to, Aunt Fannie may not work for, or happen to, Uncle Elmer.  Case studies are very interesting to note, but are only intended to call attention to the need for larger and more thorough studies.  It is my experience that many fantastic claims have been made, but few end up being true when scrutinized.  As the Apostle Paul’s mentor, Doctor Gamaliel stated, ...for if this counsel or this work be of men, it will come to nought: Acts 5:38
Over the next two years after this initial article was published, it began developing a life of its own, producing thousands of spin-off articles in the mass media, each eager for their own big story.  A restrained interest would have been a better plan of action for national and international editors to take regarding this VERY small (only 12 children) study.  After all this negative hype, the medical establishment panicked when vaccination rates plummeted by 10%.2  In the thick of it all, the Prime Minister of the United Kingdom was attacked in the media – accused of not allowing his own infant child to receive the MMR vaccine.3  Something had to be done.
An investigative reporter, hired by the equally prestigious British Medical Journal, was put on the trail.  Lo and behold, the reporter found several instances of unethical behavior:
Unethical?  Yes!  Still, none of these charges disproved his theory, but to the medical establishment, the author became the face of the anti-vaccine movement.  He had no intention to stir the hornets’ nest, but it eventually resulted in him being stripped of his medical license.  The lack of quality work, not staying above reproach by providing full disclosure of conflicts of interest, and a misplaced zeal for his patients were to blame for his downfall, …be sure your sin will find you out. Numbers 32:23
Sooooo… is there a connection, or not?!  Numerous scientific papers have since been published, touted by the press as showing that there’s no connection.  One of the largest studies, which evaluated half a million Finnish children, looked at hospitalizations for meningitis and encephalitis (conditions of brain inflammation), as well as for autism.  This study found NO increased risk of being hospitalized (after vaccinations) for any of these conditions, including autism.4  OK – so how often are Autistic children hospitalized these days?  Perhaps this happened more often during the days of institutionalization, but not so much anymore.  This study, then, gives the right answer, but to the wrong question.  Furthermore, the study only looked for connections up to the point of 3 months after the vaccination, which doesn’t consider long-term outcomes.
The next big study looked at a half million Danish children – actually this was ALL of the children born in Denmark from 1991 to 1998.5  This study looked at children for an average of 4 years after vaccination.   Just like the other study, this one also found that there was no significant difference in the rate of Autism, whether they received the vaccine, or not.  Of those that did, it didn’t matter when they received the vaccine (i.e. at 14 months old or 3+ years of age); there was no real difference.
This information is used by physicians around the world to reassure parents that it’s OK to vaccinate children during their infant and toddler years, right on schedule according to normal medical recommendations.  What this information doesn’t answer is the question as to why there has been a dramatic increase in the cases of Autism.  According to government statistics in the last decade alone, the rate has doubled.  Rates in the 1970s and 1980s were commonly reported to be about 1 out of 2,000 children.6  They are now 1 out of 59.  If it’s not the vaccines, then what is it? 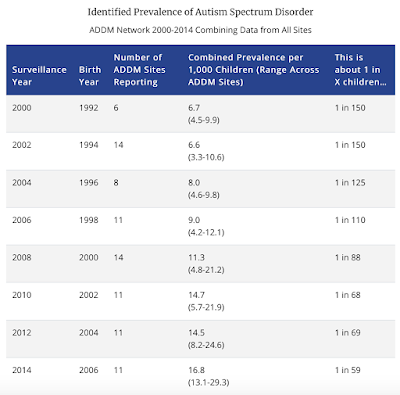 Here is something interesting to note.  A science reporter from the United Press International wrote a story claiming that the Amish have almost no cases of Autism.11  He called it the “Amish Anomaly.”  He theorized that this was the result of the fact that the Amish don’t vaccinate at the usual rate as their societal counterparts.  However, another paper showed that in 85% of Amish families in Holmes County, OH, at least some children have received at least one vaccine.  Still, further studies revealed that the Autism rate amongst the Amish was about a quarter of the national average.12
This is what we also know: Autism is more common among:
These may be inconvenient facts to those affluent families that choose to delay parenting in exchange for pursuing careers . . . though it is true that among our people, there are not a few older parents.  Still, these facts don’t account for the main increase in Autism cases.


So, my question is this: if it also seems to be less likely that vaccines are responsible for things like Autism, then what has caused the large jump in the last few decades?  Certainly, there are environmental aspects such as pesticides and chemical exposure.  There also seems to be a strong genetic component (some families appear more susceptible than others).  Finally, there is better reporting and diagnosing now than 30 years ago.
It turns out that in regards to new cases of Autism, the greatest contributing factor is what is termed “Diagnostic Inflation.”  This means that the definition of what is abnormal is constantly being expanded.  Using the present diagnostic guidelines, nearly half of the population of the country would meet the criteria for some mental disorder (not necessarily just Autism).13
The newly expanded clinical criteria used to define what is abnormal will only increase that number.  Pharmaceutical companies, with their slick media campaigns and financial incentives, together with charismatic media personalities identifying with certain conditions feed our society’s compulsion for clinching a diagnosis.  Abnormal has become the new normal.  What used to be understood as simply a part of normal human existence and behavior is now being proposed and promoted as being an illness.
It also seems like the rates, of Autism in particular, started rising about the same time that women started becoming career oriented.  Starting a family was delayed, children were put into daycare, new cars were bought, and social ladders climbed.  Could this change in family dynamics have created an ongoing effect on how children relate to their world – at the very least, for children who tend to be vulnerable?  There are powerful political and social forces that don’t want to hear the answer to that question.  The short answer to this question may well be that “if you can’t stand the answer, don’t ask the question” (just like earlier in this article). In reviewing the literature, there is a distinct lack of such research; however, there’s an abundance of research justifying the career woman’s decision. (That’s another story.)
In doing so (researching the connection between autism and career-oriented families), the medical establishment would be wise to not fall into the same trap as our foolish Lancet author. This could be accomplished by only producing quality work, by staying above reproach (providing full disclosure of conflicts of interest), and by not zealously assuming to represent and speak for every patient. In the next issue, I will outline how the medical establishment may well have come up wanting – in dealing with this same MMR vaccine.